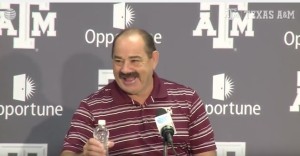 We moved to Bryan/College Station, Texas, home of Texas A&M University, when I was 9. Man, that place is different…its spirit is infectious. The University traditions create a sense of belonging and pride that grows as you fall in love with the school and the people. I swear it is one of the friendliest places in the world!! As a result, there was never a question of where I would go to school….

Aggieland was community, it was pride, it was honor, it was authentic, it was family, it was tradition, it was home!

So it should be no surprise that years later I love Aggie sports and no sport is greater in Texas than football! (Sorry son…I love soccer too.)

I don’t just watch the games…we celebrate the games! In true Aggie fashion, we’ve developed traditions around how we watch the football games. We plan special meals, gather with my sister, and make it an event!!

I’m such an Aggie football nerd, that I even watch all the press conferences on YouTube…..I know…I may have a problem.

But every now and then, I come across life wisdom that has to be pointed out and acknowledged. That happened a few weeks ago….

For non-Aggie followers…our offense for the last few seasons has been okay (not Johnny Manziel okay but not bad). Our defense has struggled, mostly because we had a lot of young guys. So Coach Sumlin, in his brilliant wisdom, hired John Chavis to head up the Aggie defense. This season there has been a night and day difference in our defensive line!

How is this possible, is Coach Chavis really that awesome? Did these young kids just train all summer? How? What? Huh????????????

Now Coach Chavis is good and they did train hard all summer but I think I heard the secret one day during a press conference. Coach Chavis was asked how he had been able to build confidence in the team that had played so poorly last season….brilliant question because we were all wondering.

His answer was GOLD….

“You put young men in situations where they can have success. You coach them and give them the tools that they need to go prepare. But when they have success they start gaining confidence. You got to be very very positive with them. If you’re not careful coaching can be a negative profession because you’re always correcting. And you got to make those corrections but you got to do it in a way where you’re not beating kids down. We expect a lot out of them. We hold them accountable and they hold each other accountable but we are not going to beat them down, we are not going to beat them down. That’s been the approach we take. We have high expectations for them but each one of those guys is somebody’s son, they’re our football players and we got to treat them that way. Have high expectations, show them how they can get it done, and they’ll go get it done for you.”

You coach them and give them the tools that they need to go prepare. Click To Tweet

So let me tell you what this counselor heard:

Now that is a solid approach to coaching, parenting, teaching, leading, and team building.

Criticism kills relationship. If you are in a role where you have to correct (like any of the roles listed above) then how you correct is important. If you beat people up with your words, you may accomplish your initial goal of behavior change, but you have lost the relationship. Relationship is what grounds us, connects us, and makes us want to work hard for people.

Those Aggie boys are fighting hard on the field for Chavis because of his approach, because they are inspired to do well for him.

As parents, isn’t that what we want? Kids that are inspired and empowered to reach their maximum potential? Unfortunately, too often we think constant criticism, harshness, or belittling will change behavior. It wouldn’t work for me and it wouldn’t work for you. In fact, think of the last time you were treated that way? Didn’t it make you want to NOT be around that person?

Correction doesn’t have to be negative. If we focus on the relationship first and major on the positives, then we earn the right to speak correctively.

If we focus on the relationship first...then we earn the right to speak correctively. Click To Tweet

“Gracious words are like a honeycomb, sweetness to the soul and health to the body.” Proverbs 16:24

“There is one whose rash words are like sword thrusts, but the tongue of the wise brings healing.” Proverbs 12:18

Watch the press conference below, the question is asked at about 2 minutes, 30 seconds in.

Permanent link to this article: https://counseling4hope.com/coach_chavis/

To spread help and hope during this time of crisis, I am posting regular help videos to my Facebook and Instagram pages. For immediate anxiety help, click this link to find  calming skills videos.

I offer both in person and secure video sessions.

Office conveniently located off 121 at the Plano/Frisco border

Interested in finding out more information about working with me?